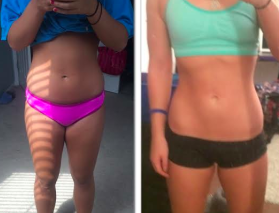 I went through a plateau since all I have been doing for the past year was a bunch of cardio and random lifting exercises. After having Sarah for a coach she really got me back on track, and has been a huge role model in my life ever since. This is my 30 day transformation. 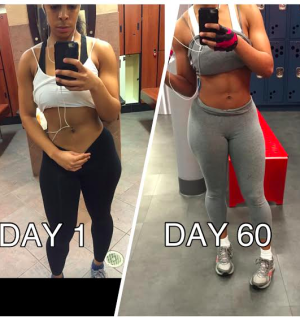 Due to stress eating, not being consistent at the gym, and sleep deprivation I gained 25 pounds during my first semester in college. When the New Year was approaching, I realized how down on life and depressed I was from not being healthy like I usually was so I decided to make a change. This right here is two months of dedication to the gym and changing my eating habits. I am now aspiring to become a personal trainer in New York. Thank you!

Can’t believe the couple’s challenge is over already, I wish it kept going! I’m super excited to share my final results with you, but before that I want to thank you from the bottom of my heart for helping me to learn the right way to go about diet and exercise, and teaching me how to finally start working towards the lofty goals I’ve set for myself.  I’ve wanted to work with you for a while, ever since I saw your first posts about when you were in college, and the unhealthy habits you held back then.  I knew that you would be the right trainer because you could understand where I came from.  During my senior year of college and into my first year post-grad I battled anorexia and bulimia.  It gets a bad rep, and a lot of people don’t understand the mental struggles of it, and that it truly wasn’t just a “choice” I made, it went deeper than that.  By the time I decided to get help I was 5’8″ and only 104 lbs and 4% body fat, and in danger of developing health issues.  In the year following that, it was a major struggle for me to put on weight again and especially for me to put on weight and be okay with it, as well as difficult to convince my friends and family that I was really trying, and that after time, I would be able to recover.  After about a year my weight ballooned back above where I was before I became sick in the first place, my metabolism was molasses-slow, and I was struggling.  This was when I met my boyfriend (and partner in the challenge) Nick.  He was so encouraging and supportive and non-judgmental, and over time, my weight steadied out.  I wasn’t happy though because I wanted to be better than just average, and prove to everyone that I meant what I said, and that I could become so healthy and strong, and they were all going to regret ever doubting me.  I wanted them to look up to a strong woman, who they looked down on when I was at my lowest.  I began educating myself as much as I could at that point and trying to eat healthier, incorporate weight lifting in my workouts, but a year later I still wanted so badly to take it to the next level.  So, for my 24th birthday I told Nick I wanted my gift from him to be his partnership with me in a 2-month ass-kicking from Sarah and Josh Bowmar (I’m still shocked he agreed).  Now that it’s over I’m amazed at how far Nick and I have come, and I’m so proud.  You and Josh were so responsive and dedicated to us and I’m sure all your other clients, so I thank you so much for that! We feel better than we ever have, and personally, I feel stronger, more confident, and more sure of myself and my abilities than I ever did when I counted calories and made myself a slave to the elliptical.  My only regret is that I didn’t do this with you sooner.  Nick and I have already decided that we want to continue with the diet, and start back at day 1 with the couple’s plan.  I couldn’t imagine NOT doing it every day now.  And while I’ve wanted to do a fitness competition for over 2 years now, I actually feel like I could do it…and even Nick suggested he and I go in on it together haha!  Of course, I hope we win and we get that opportunity to work with you and Josh for another 6 months, but even if we don’t, I’m endlessly grateful for the path you’ve put me on. 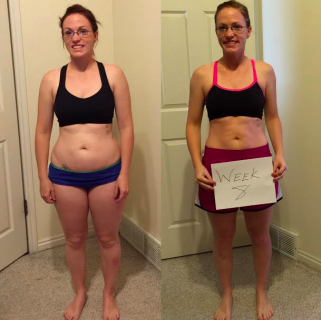 Wow 8 weeks sure did fly by fast! I’m so thankful for your couples challenge. My husband and I were able to get back on track with a healthy lifestyle. We both have learned so much and we are excited to show our boys how to make better choices. Thanks so much! Attached is my Week 1 vs Week 8 pictures.

I could not be happier with my results. The professionalism and knowledge that these two have is far beyond anyone else in the industry!